So I was excited about this text editor that every one loves. Sublime Text. I downloaded Sublime Text 2 (For some reason I was reading it wrong, I thought it was Subline and only now I found out it was Sublime :/ ). So I started coding some basic stuff. And immediately notice that it doesn’t support Bangla. I basically used google translator to translate my Bangla (Me Lazy! :p , I don’t keep avro and all those stuff installed .. I either translate or type online from various online Bangla typing sites). I found out it was all broken. When I saved and saw it on browser. It was even worse.

Then next I thought You can’t write Bangla on HTML (since this was probably the first time I tried it in code), So I opened in Notepad and saved it. It was alright.

Then I tried again in sublime text, It started working in it for some reason.. No Idea way :/ .. I mean the on the editor it’s broken but everything is okay on the browser. 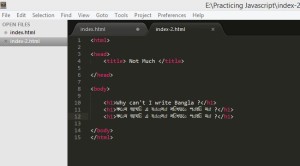 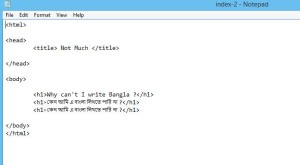 Weird kind of fix , I know.. I think it will work with all other Unicode Characters.

Summary of the fix

Buy Me a Coffee